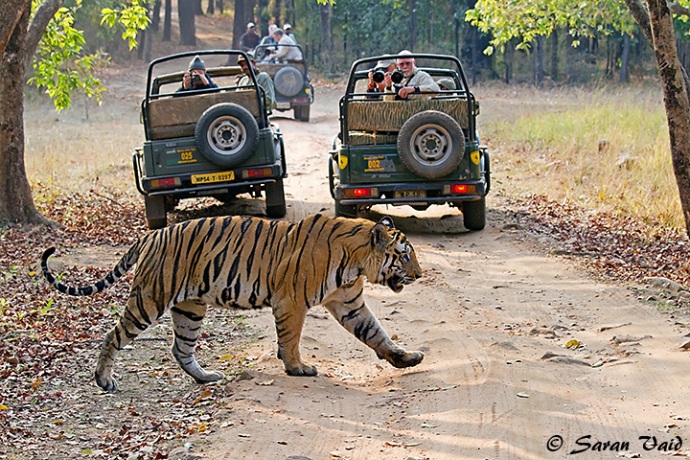 Tiger is one the most beautiful wildlife creators of India that has always pulled the attentions many national ad international wildlife photographers. For years, India has been considered the home to the tiger and today it has some of the world’s best tiger reserve parks that you must explore if you really want to capture this beautiful creator within your camera. So, if you are planning for wildlife adventure and want to see tigers in its natural habitat, here are some of the best options and tiger reserve national parks that you can or must visit at least once in your lifetime: Jim Corbett National Park – Situated very close to Nainital and Bijnore districts, Corbett National Park is one of the oldest national parks in India. Renowned for its tiger preservation, this park has always been the popular choice among wildlife tourists. Comprising of 512.8 km area and featuring marshy depressions and grasslands, this destination provides you opportunity to view tigers in its most natural habitat. In fact, the other key highlights of touring to Corbett National Park are here you can also enjoy viewing of leopards, gharials, forest cats along with long-nosed crocodiles. If you are planning to visit this park, there are lots of ways to get to the park. With a distance of 50Kms, Phoolbagh airport is the nearest airport. Though you may also reach, travelling by road, as the Corbett National Park is well connected to the nearby states as well.

Ranthambore National Park– Situated hardly at a distance of 14 kilometers from Sawai Madhopur district, Rajasthan , Ranthambore national park is yet another famous tiger reserve park and home to India’s national animal. It is one of the best places in India to view these majestic predators. Nevertheless, while visiting to this national park you may also enjoy viewing other kinds of cats found in this national park, such as – Leopard, Caracal and the Jungle Cat. However, this park is also considered as home to India’s largest antelopes, Sambhar, Chital, Chinkara and Nilgai. The best time to visit this national park is between October to March. Adding to this, the best way to reach this Ranthambore Park is by train from the Sawaimadhopur Railway station, which is just about 12 km from this park. You may even fly to the nearest Jaipur airport and then drive to Ranthambore.

Bandhavgarh National Park – Spread at the Vindhya hills in Madhya Pradesh, India, this is another national park and best known for its highest ratio of Royal Bengal Tigers. Moreover, the key feature that makes this national park different from other parks is its density of white tiger population. Apart from this, the park is also an un-spoilt national habitat for a variety of other wildlife creators such as leopard, wild boar, sloth bear and spotted dear. The most appropriate visiting season to this park is between January to April. While you can reach to this park by travelling through train, the nearest railway station to Bandhavgarh park is Katni (102 Km, Jabalpur (164 Km) and Satna (120 Km) on the central railway.

Kanha National Park – Spread almost over an area of more than 940 sq. km, the Kanha national park is situated in the Madhya Pradesh. Although best known for its tigers, the other most frequently seen animals in the park are Sambar, Leopard, Sloth Bear, Swamp Deer, Wild Boar, Jackal and Wild Dog. This park is also known for its rich vegetation that mainly comprises of Sal and Bamboo forests along with grasslands. The most ideal time to visit Kanha National Park is in the months of April to June and November to January. If you are looking forward to explore this destination, then you can easily reach here by your hiring taxi or bus as it is well connected to Jabalpur 175-kms, Nagpur 266-kms, Mukki 25-kms and Raipur 219-kms by road. Though, Jabalpur is the nearest railhead to visit the Kanha National Park. Definitely, no other place on this planet can encounter this fascinating creator in its natural habitat than India. All these reserves and national parks are well protected under Project Tiger to provide a protected and appropriate environment for the growth and survival of tigers. A visit to any of these parks will surely be a lifelong experience.

Promote Your Page Too